Du bist da: Heim Blog How was the year 2019 for the Spanish real estate market?

How was the year 2019 for the Spanish real estate market?

Do you also think that 2019 is a deep past? I am asking because this is my impression, although it is only the end of April, which is when the data for the previous year are already available and consolidated. We are presenting the data to you now, because the pandemic got our attention – like of the rest of the world.

We are carefully looking at the impact of global lockdown and the state of emergency in Spain on the local real estate market and we decided to give you a good comparison base by preparing a reliable picture of the real estate market in Spain in 2019.

Property sales in Spain in 2019

Sales of Spanish properties fell in 2019. It happened after six years of continuous growth. Here is the data of the National Institute of Statistics.

Last year, half a million real estate purchase transactions were entered in the land register, which is about 3% less than in 2018.

A significant decline occurred on the secondary market, while the primary market increased slightly compared to 2018.

Property sales in Spain in 2019 depending on the region

The decrease in sales was more pronounced in the areas of interest of foreign investors. Sales dropped the most in the Canary Islands and the Balearic Islands and by 7% in both Alicante (Costa Blanca) and Malaga (Costa del Sol). An interesting case is the Costa de la Luz in the province of Cádiz, which recorded a 4% increase in a relatively small market. 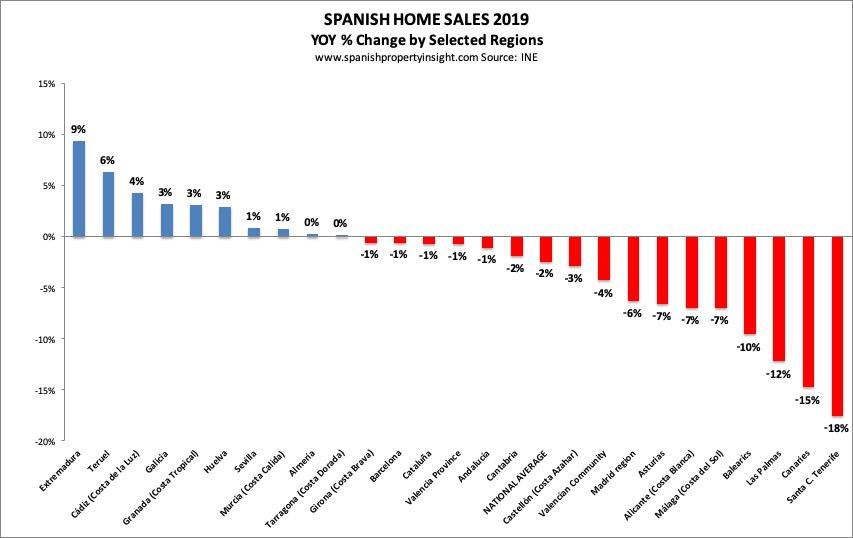 Trends that affected the Spanish real estate market in 2019

Sales on the real estate market in Spain were fueled by forces usual for this market, among others, satisfying new housing needs of households and modernization of existing ones. There were a slight decline in investment and interest from foreign investors, as well as a slowdown in the growth of the Spanish economy.

In 2019, there were also factors whose negative impact on the real estate market was significant:

Foreign investors on the real estate market in Spain in 2019

According to data from Registradores.org, in the third quarter of 2019 foreign buyers made almost 12.6% of buyers of Spanish real estate. For comparison, in 2009 they made only 4.2%.%.

Among the regions with the highest percentage of foreign buyers we find:

The province of Alicante (including Costa Blanca) remains the region with the highest percentage of foreign buyers: they accounted for almost 41% of total sales in the third quarter of 2019. Most foreigners buying real estate in Spain came from the United Kingdom (14.3%), France (8.4 %) and Germany (6.6%). 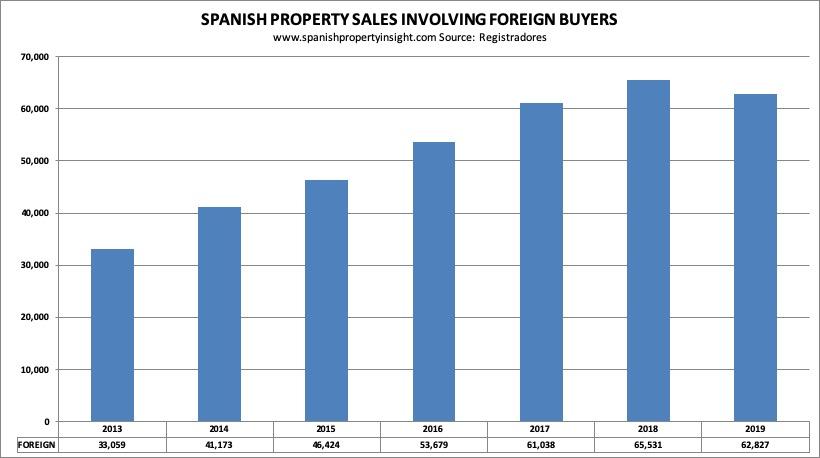 According to the latest market report of the Spanish association of land registers, based on the number of registered sales, foreign buyers participated in 62,827 transactions of purchase of Spanish real estate in 2019. Because the buyer has a month to register their sale, the exact number of foreign investors may be slightly different. This translated into a drop of 4.1% year on year. After eight years of continuous growth, this is the first drop in the number of Spanish properties bought by foreign investors in this decade.

In terms of nationality, the British were by far the largest group of buyers - they closed 8,726 transactions (14% share in the foreign market). The French and Germans came next. 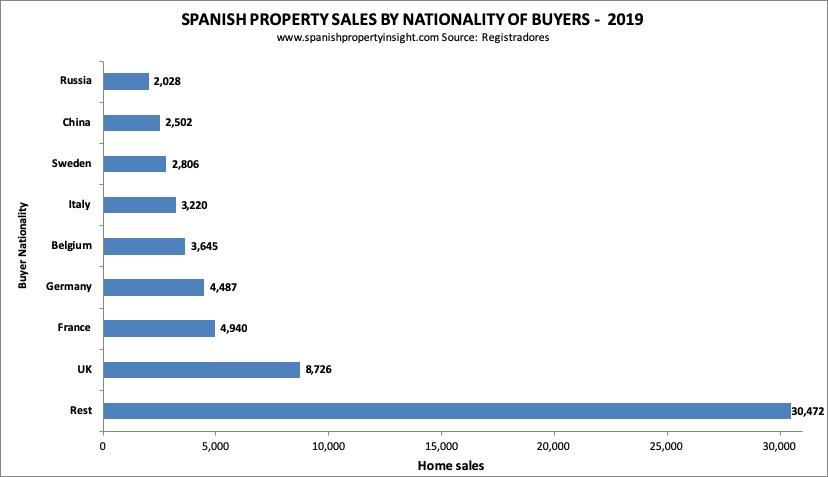 France was the only large market that recorded an increase in the number of buyers last year (an increase of 1.2%), while the United Kingdom fell by 14.3%, and buyers from the relatively small markets of Sweden (-25.7%) and Switzerland (-31.3%) did a “bad job” shopping in Spain in 2019. 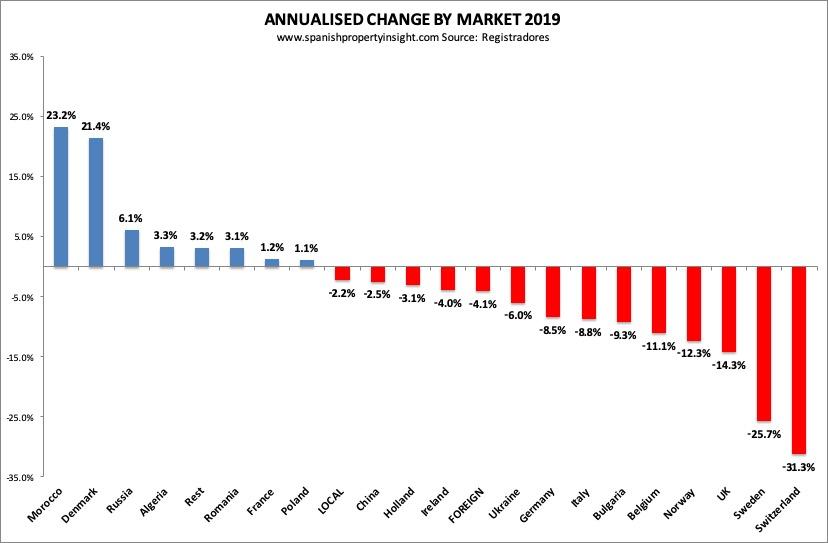 Despite the fall in foreign demand last year, the share of foreign investors in the market remained stable at 12.5% ​​of the market, as local demand also shrunk. 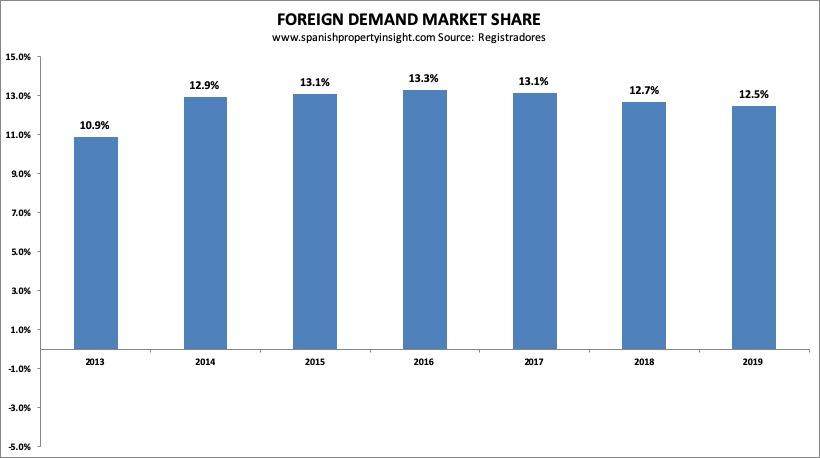 The foreign market has been growing continuously since 2010 and it was inevitable that the expansion would eventually end, as is the case in all real estate markets.

Real estate prices in Spain in 2019

The average price of apartments in Spain increased by 4.6% year-on-year, comparing data from December 2018 to December 2019 (data from the Idealista.com). Housing prices have risen by almost 13% since December 2014, when they reached the lowest level in the whole country, but remain by almost 13% lower than in December 2007, when historical highs were reached.

Provinces that have seen one of the most important price increases are:

If we compare the prices of the three major cities in Spain between December 2019 and December 2014, when the market began to improve, we will see that Madrid recorded a 38.6% increase, Barcelona by 34.4% and Valencia by 30.2%.

The year 2019 was the first in which a slowdown in the real estate market in Spain was recorded after more than eight years of continuous growth. Despite the slowdown, the market share of foreign investors did not change significantly and they made 62,827 transactions. The 4% slowdown in the market did not mean that the crisis was lurking around the corner, it was rather an announcement of market stabilization at the level it reached in December 2019. Nobody predicted that CoVid19 was around the corner. What will be its impact on the property market in Spain? We collected the first forecasts in the entry: https://www.dreamproperty.es/blog/92/how-will-coronavirus-covid19-affect-the-real-estate-market-in-spain

We observe the situation and will comment on it for you on a regular basis.

From a purely human point of view, natural disasters - because that's what we should call the consequences of all of this - often force people to assess their lives and verify their needs. The awareness that "I can be hit by a bus tomorrow" contributes to the search for a balance between private and professional life. Therefore, there is a high probability that many who so far have only dreamed about their place on some sunny coast will decide not to wait anymore, but to start fulfilling their dream immediately.