Du bist da: Heim Blog What is the situation on the property market in Spain in 2021?

What is the situation on the property market in Spain in 2021?

I have already written on various occasions about the fact that 2021 has taken us by surprise. The acceleration of the real estate market in Spain is the opposite of what we could have expected after 2020. The pandemic made the scenarios for the coming years not very encouraging, even a crisis was expected. It turned out to be completely different.

The figures we'll cover in this article aren't complete Q3 data yet, but they're worth a look.

Only four of the six indicators were updated in the third quarter, two of them refer to the second quarter prices, but all show the increase in Spanish property prices during the period to which they relate.

The following property price indices in Spain have been updated in the third quarter of 2021 (all figures show the most recent year-on-year percentage change):

Notaries also publish data on real estate prices in individual regions. While data for Q3 are not yet available, we already have data for August, which gives us an idea of ​​where prices are going regionally.

Property prices in Spain are rising sharply in most regions of interest to foreign investors, with the exception of Catalonia and Murcia.

Once again, prices have risen double-digit in the Balearic and Canary Islands, possibly due to factors such as the shortage of properties for sale and an upward shift in the market, especially in the Balearic Islands. The pandemic may also have increased interest in homes on the islands, which are seen as offering better protection against the virus.

In Catalonia, on the other hand, the regional government levies the highest property taxes in Spain, and recently introduced measures to control rents, which discourage investment. These factors may help explain why property prices in this region are more muted than in other parts of Spain. 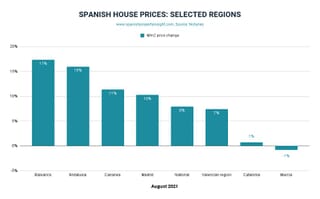 Number of transactions on the example of August 2021

According to the analysts of the already quoted portal Idealista, this year we had the best August since 2007 in terms of the number of real estate sales transactions. This number has already increased by 37% this year. According to the INE data, 49,884 transactions were registered in August this year. It was an increase of 57.9% year on year. Over 40,000 were real estate from the secondary market.

According to Francisco Iñareta, a spokesman for Idealista:

“The number of operations for the second month in a row is at a record level not seen for over a decade. The gradual recovery from the pandemic, record levels of household savings, low ECB interest rates and the best mortgage conditions in years keep the Spaniards' appetite to buy. This appetite is compounded by the zero (even negative) profitability of bank deposits. If this ratio of sales continues, it is likely that the supply of available real estate will decline significantly, which could create price stresses in the future.”

As for the sale of real estate from the primary market, it remains below the highest values ​​recorded in spring 2014 and does not exceed 10,000 transactions (9,609 units in August). However, the largest percentage increase in the number of transactions this year is recorded in the primary market: 43.4% compared to the first eight months of 2020. The secondary market, in the same way, grew by 35.7%.

Number of property sales in Spain by region

The highest year-on-year increases in the number of properties sold in Spain are recorded in the following regions:

On the other end, we have the regions that recorded the lowest increases:

Andalusia, Catalonia, Galicia, Castilla-La Mancha and Navarre are also above the national average. In turn, in Aragon, Asturias and the Canary Islands, the increase in the number of real estate sales year on year is less than 27%, which puts them at the bottom of the table.

In terms of absolute values, the most visible are Andalusia (10,401), Catalonia (7,606), the Comunitat Valenciana (7,339) and Madrid (7,321). On the other side of the ranking, there are several regions with fewer than 800 sold properties registered in August: Asturias, Cantabria, Extremadura and Navarra.

The residential market in Andalusia is booming, perhaps in part thanks to the regional government's decision taken in April 2021, to lower the ITP tax on property transfers and the AJD tax.

Research from the real estate portal Idealista shows that five of the ten largest municipalities where prices have risen the most since the start of the pandemic are located on the coast of Andalusia.

Idealista analysts compared asking prices in September 2021 to the same month of 2019 to get a pre-pandemic benchmark. Research has shown that the coastal municipalities of Andalusia have seen some of the largest increases in asking prices in Spain, possibly due to the impact of the pandemic on supply and demand.

The latest figures from the Association of Spanish Notaries also show that real estate prices are rising faster in Andalusia than in any other region, with the exception of the Balearic Islands, which are also of interest to foreign investors.

All indications are that the housing market on the Costa del Sol is experiencing a mini-boom after the pandemic, perhaps even thanks to the pandemic. Buyers are more interested than ever in regions that offer space and fresh air close to cities that are in turn well-connected. The shift away from city centers towards the coast helps explain why asking prices are falling in most neighborhoods in Barcelona and rising in holiday destinations such as Marbella.